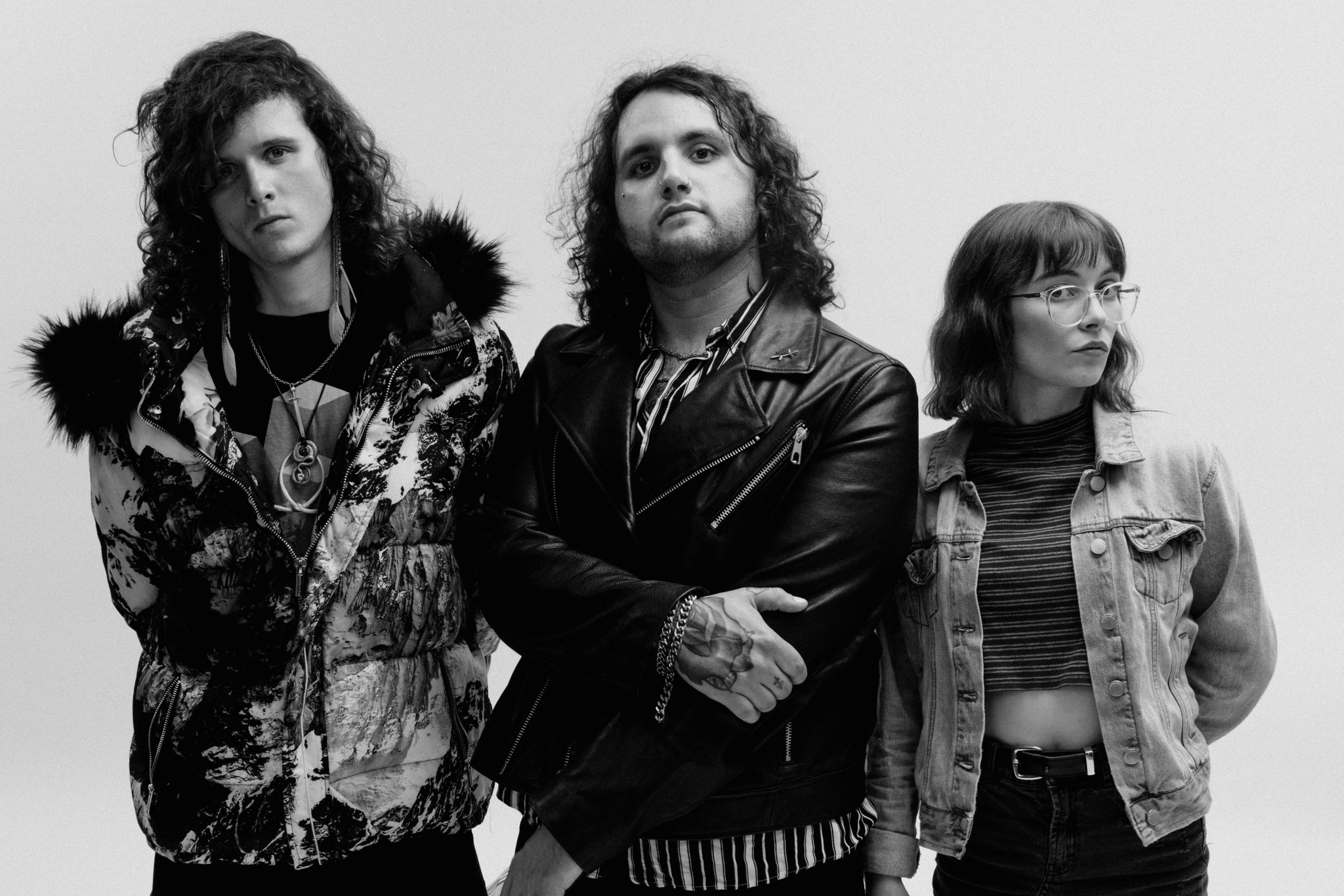 Vagrants – ‘Be Consumed’ Album Release Show. Playing their new album in its entirety. With local support from Afterdusk, Burning Strong, Fauxfox, Kairo
Friday, Jun 3
Doors at 7 PM
Show at 8 PM
When post-hardcore trio Vagrants sat down to begin work on their debut album, there was no grand plan in place. The Pensacola, Florida band – vocalist/guitarist Jose DelRio, guitarist Bryce Ballinger and drummer Anna Hayes – adopted a very simple mantra: write the best songs they possibly could, and present an honest and true representation of their band. And that’s exactly what Be Consumed – released April 29 via Equal Vision Records – is. A thrilling collection of 10 emotionally-charged, deeply personal and sonically vibrant songs, it’s a record that breathes new life into the post-hardcore scene, showcasing a band operating with a true belief in their craft.
Recorded during lockdown with producers Matt Goldman (Underoath, The Chariot) and Sam Guaiana (Silverstein, The Devil Wears Prada), Be Consumed scales-up the promise of Vagrants’ 2019 EP Separation, broadening their sound and pushing their emotive brand of post-hardcore into new and exciting directions. Anthemic single “You Still Linger” offered an early taste of that power and what is contained within Be Consumed. A song that, according to Jose, recounts his experiences with depression and “the ghost on your shoulder that follows you around as you search for closure,” it’s a fitting introduction to a record that tells of the Vagrants frontman’s experiences with mental illness and trauma.
“Be Consumed was like trauma therapy for me,” Jose says. “It’s me working through stuff I’ve been holding onto since childhood. The original title we had for the record was What It Is To Love Is To Be Consumed, and I think that summarizes what we’ve written about here. This album is about being consumed by your emotions, by love and by depression; it’s about submitting to being hurt, letting your guard down and putting yourself in harm’s way, because that’s the only way to fully feel everything that love and life has to offer. I’ve felt consumed by my anxieties and emotions in recent years, and Be Consumed reflects that.”
Wherever you look on Be Consumed, emotions run high. The title-track, for instance, tells of the feeling of hitting rock bottom when consumed by depression. The titanic “Aimless,” meanwhile, sees Jose, Bryce and Anna take a more universal look at a world consumed by darkness, and how, with every passing day, we’re coming closer to destroying the planet we call home. “It’s about where we are as a society,” Jose says. “It’s a nihilistic perspective on all the things that are fucked up in the world – deforestation, war, famine – and how we’re collectively turning a blind eye.”
Supporting these strong sentiments throughout Be Consumed is a vivid musical backdrop. According to Anna, Jose went down the rabbit hole during lockdown, as Vagrants’ leader experimented with new textures, electronics and instruments that could enhance the band’s sound. The result is a record with a beautiful sound design, and for Jose, it’s allowed him to further define the bands sonics by fusing the best of old and new.
Be Consumed represents a beacon of belief for Vagrants, in both themselves and the power of music to make a positive change. For Anna, it’s that belief that will be driving them as the band unleash their debut album on the world.
“We’ve never worked harder than we have with Be Consumed, and that shows in the quality of the record,” she concludes. “We pushed ourselves to the fullest, grew our confidence and made something of which we’re all incredibly proud. And there’s more to come from Vagrants yet.”
Vinyl Music Hall Policies
General Admission * Standing Room Only * If Any Seating Is Available, It Will Be On A Strictly First Come-First Serve Basis * All Ages * Additional $5 Cash Surcharge At The Door For Under 21 * Attendees Under 16 Must Be Accompanied By A Ticketed, Adult Guardian * Lineups and times are subject to change * Any ticket suspected of being purchased for the sole purpose of reselling can be canceled at the discretion of Vinyl Music Hall and/or SeeTickets * No refunds – No exceptions * No re-entry.