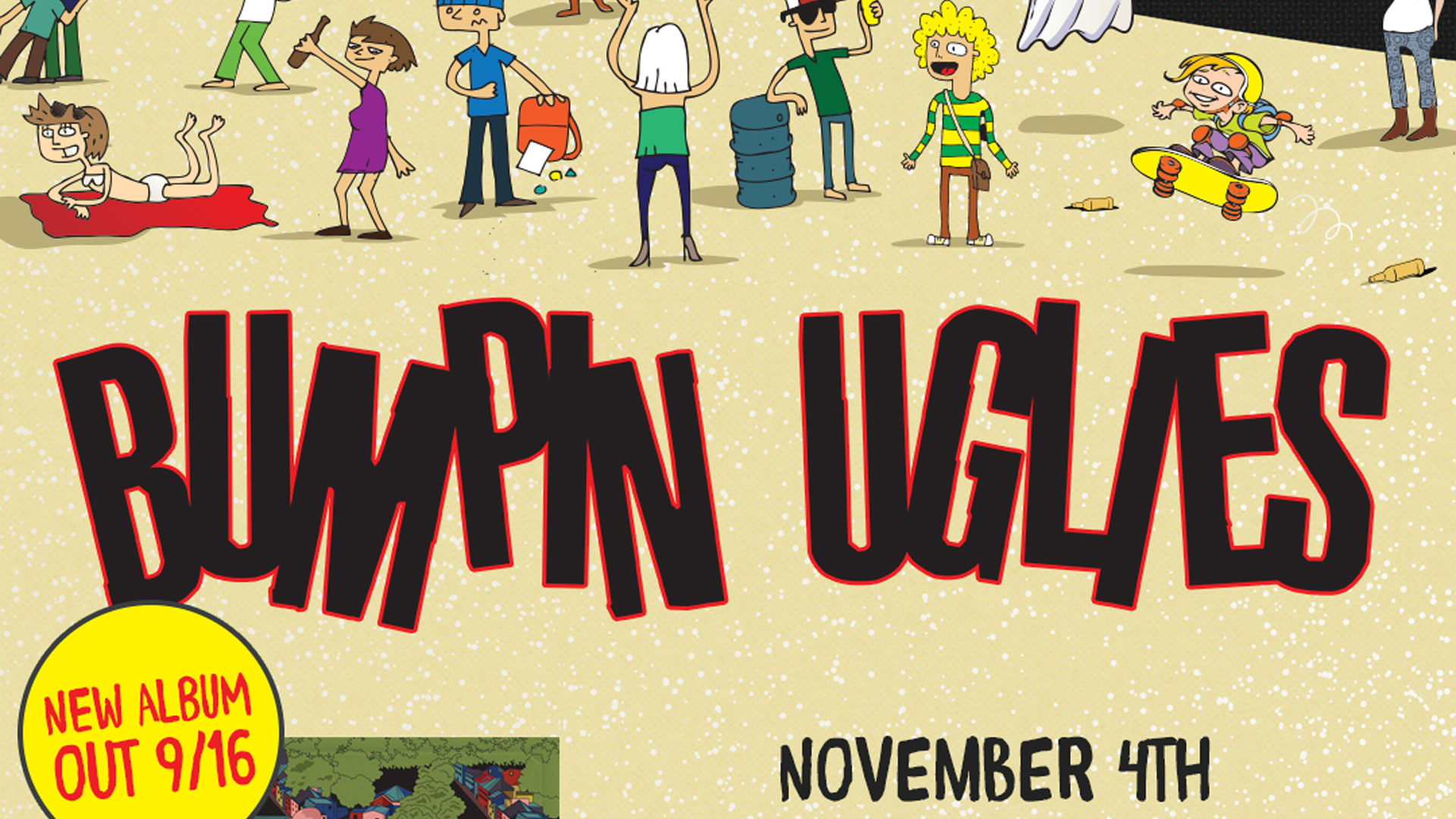 Bumpin Uglies w/ special guests Tunnel Vision and Joey Harkum at Vinyl Music Hall
Friday, Nov 4
Doors at 6:30 PM
Show at 7:30 PM
Bumpin Uglies knows all about hustle. The Maryland reggae-rock band had spent more than a decade on the road, starting with local open mics and backyard parties and growing into road warriors, building an ever-expanding audience with sold-out shows in clubs and prime spots at festivals from coast to coast, on one national tour after another. Then the pandemic hit, and touring shut down. After being in motion for so long, singer and lead guitarist Brandon Hardesty wasn’t about to sit still, even if he couldn’t be out on tour. In fact, Bumpin Uglies never really stopped working — they adapted. The group returned to playing backyard parties around Annapolis, where they’re based, and added socially distanced concerts and full-band livestreams. In the fall of 2020, they also started releasing a new song every month as part of a project called the Never Ending Drop. “We felt like prospectors going out and trying to find gold — it was just uncharted territory,” Hardesty says. “We had to figure out a way to make a living. That’s kind of what being a musician during Covid has felt like to me. You can do it, but you have to be bold.” Hardesty has been bold from the start. He was waiting tables when he started the band in his early 20s. With an ear for melodies and the determination to succeed, he poured his time and energy into making Bumpin Uglies a success. For years, the band did just about everything themselves, from booking shows to releasing their own albums, building a sense of momentum along the way that eventually became self-sustaining, and then Hardesty wasn’t waiting tables anymore. No surprise, then, that a musician with his strong work ethic found a way to take maximum advantage of the sudden surplus of time at home. For one thing, he got to hang out with his toddler son, and he and his wife welcomed a new baby. He also wrote a ton of songs. For the first time, Hardesty approached songwriting as a discipline, dedicating time to working on new music rather than waiting for inspiration to strike and then jotting down ideas in the back of the Bumpin Uglies van on his way from one gig to the next. “I just woke up every morning and I made a pot of coffee, and I had this running list of ideas in my phone for hooks and riffs and progressions,” he says. “I sat down every day and made myself write a song, and 85 percent of them were pretty good. And it was awesome. I really, really enjoyed the process.” The result is the band’s seventh studio album, Mid-Atlantic Dub, which they recorded in 2021 and plan to release this fall. After showing the breadth of Bumpin Uglies’ influences on the Never Ending Drop, from folk to classic country to hip-hop, Mid-Atlantic Dub brings the group — also featuring Dave Wolf on bass and vocals, Ethan Lichtenberger on keyboards and TJ Haslett on drums — back to the core of what they do. “It’s very groove-focused,” Hardesty says. “It’s very hooky, very vibey. It’s very accessible, but there was no compromise on the storytelling or the lyricism.” In fact, Hardesty had a lot on his mind while working songs for Mid-Atlantic Dub. He had recently lost his own father while he was stepping into being a dad himself and letting go of the vestiges of childhood, all during the uncertainty of a global pandemic. It’s all there on “Slow Burn,” featuring Jacob Hemphill from SOJA. “Before the oak you got the sapling and the seed Before you triumph you will swallow a defeat,” Hardesty sings over unhurried upstroke guitars and a beat laid back into a deep pocket. “I was doing a lot of growing up during Covid,” he says. “It was very much like a survival thing, and when you’re in that kind of mode, it forces you to cut a lot of bullshit out of your life.” What’s left, in Hardesty’s songwriting as in his daily life, is what’s real, and what’s real stands a solid chance of connecting with an audience that appreciates openhearted lyrics paired with a tight reggae-rock vibe. “For me, it’s just all about honesty,” Hardesty says. “That’s what I listen for when I’m listening to music. I want to feel like whatever the author’s saying is honest.”
Vinyl Music Hall Policies
General Admission * Standing Room Only * If Any Seating Is Available, It Will Be On A Strictly First Come-First Serve Basis * All Ages * Additional $5 Cash Surcharge At The Door For Under 21 * Attendees Under 16 Must Be Accompanied By A Ticketed, Adult Guardian * Lineups and times are subject to change * Any ticket suspected of being purchased for the sole purpose of reselling can be canceled at the discretion of Vinyl Music Hall and/or SeeTickets * No refunds – No exceptions * No re-entry.